• We have one chap who has come forward. He’s faced abuse three times in the space of about a week. I think all were 5G/corona related. He’s the one who had water thrown at him. In the most recent incident a member of the public spat in his face causing him to have to self-isolate.

• An apprentice network engineer was attacked by a member of the public while travelling in his works van between jobs in Wood Green, north London. He had been waiting at traffic lights when a woman jumped out in front of his vehicle, shouting at him about the dangers of 5G before throwing a bottle of water. The contents entered his open driver’s window, soaking him and the cab.

• A network engineer, in Western Super Mare, had been working in one our green roadside cabinets to fix a fault. A passing car pulled up and the male driver lowered his window to ask him; ‘are your working on 5G?’ He replied ‘no’ to which the driver responded: ‘Good because it’s killing people and if I find out who is I’m going to beat them up.’

• A customer service engineer, in Abercynon, in Wale , was working in an underground joint box near a bust stop when he was approached by a member of the public who became very agitated and started shouting things at him including telling him; ‘you’re partly to blame for the corona virus because you’re installing 5G networks’ and ‘ the radio waves from 5G will be killing people – Openreach should be f**king proud of themselves’. At this point, a number of people waiting at a nearby bus stop joined in – agreeing with the individual and accusing the engineer of risking people’s lives.

• A network engineer, in Birmingham, was approached by two male youths while sitting in his van. One asked him if he had anything to do with installing 5G masts. He told the individual that he was just a normal telephone engineer. The youth responded telling him; ‘if you’re anything to do with 5G then there will be f**king trouble’ before punching the van door and walking off.

• An engineer was working to upgrade a TalkTalk customer to fibre broadband, in St Neots, in Cambridgeshire, when he realised there could be a related problem inside the customer property. He approached the front door but could hear coughing and sneezing coming from inside. He spoke to the customer and explained he couldn’t enter the property due to Covid-19 related working restrictions. The customer became very aggressive and abusive at which point the engineer told him he didn’t feel comfortable with the situation and was going to leave. The customer replied; ‘you’re not going anywhere until its done!’ before grabbing the engineer and forcing him to the ground. The engineer tried to get away but was unable to immediately free himself as the customer had wrapped his legs around his neck and torso while repeatedly pushing his head into the ground.

• A planning engineer in Bristol who was out surveying an area of the city as part of plans to build was approached by an angry member of public complaining that he had lost his Sky channels. He threatened the engineer with physical violence and said that he was going to ‘breathe all over him,’ if he didn’t fix the problem.

• A team of engineers working on connecting high-speed broadband to a new home development Greenhithe, near Dartford, were confronted by a woman who screamed at them ‘murderers – you should be ashamed of yourselves.’

• Another group of engineers working install fibre broadband to homes in Blantyre, in Scotland, were accosted by a local council worker who accused of not abiding by social distancing rules and complained that their vehicles were causing congestion on the estate. He threatened to report them to the police and local council. The same engineers were also approached by a local resident who shouted that their bosses should be ashamed of themselves and weren’t taking the Corona crisis seriously enough by letting them continue to do non-essential work out in the street. 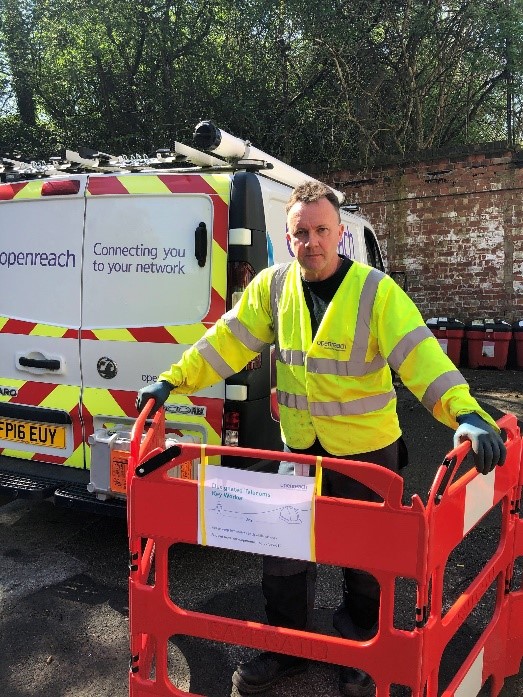 What is your role in maintaining the network and supporting customers during COVID-19?

Has your role changed since the lockdown? If so, how?

We have new working practices relating specifically to the COVID19. When a CNI job comes in we’re coordinating with our planners ‘on the job’ – so we can get the work done in the shortest possible time to keep the UK moving.

Some of our business customers are now taking temperature checks if we have to go on-site. In some instances we’ve had to sit in front of thermal imaging cameras to check our whole-body temperature over and then answer a bunch of virus-related questions before being allowed in.

Why do you think it is important that you continue to work during COVID-19?

We have to keep the country connected more than ever at these uncertain times, making sure hospitals, banks and data centres - as well as many other key operations - are fully functional.

What do you find most difficult about working during the lockdown?

The constant worry of putting yourself in situations where there’s an increased chance of catching this virus – and knowing what its capable of – is the most difficult thing. On the plus side, I actually love how quiet the roads are – it’s very peaceful!

Can you tell us about your proudest moment while working during the lockdown?

We recently installed an Ethernet circuit for a pharmaceutical company in Alderley Park, in South Manchester that is helping to find a vaccine for Covid-19. We worked round the clock and managed to complete the connection in just one day. Under normal circumstances these sort of jobs can take a number of days.

Has the response you receive from the public changed since the lockdown?

Definitely. I think we’re being noticed as key workers taking into account the amount we actually do for customers and the infrastructure of the country. Only the other day I was thanked by a member of the public after buying a sandwich from a local shop. 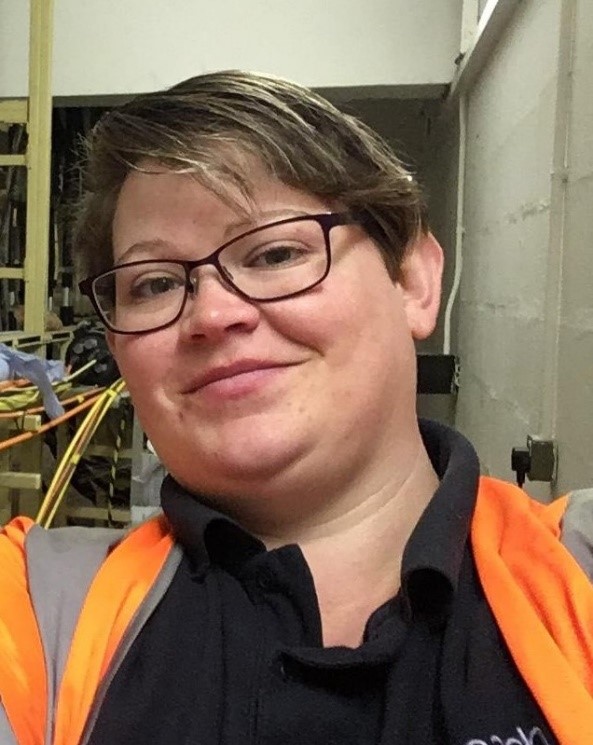 What is your role in maintaining the network and supporting customers during COVID-19?

I work as an Ethernet fibre jointer – providing and maintaining new and existing critical business circuits. Many of our customers need critical broadband links for essential public services – like the NHS, so the turn-around for repairs is almost instant to ensure there’s no loss of service.

Has your role changed since the lockdown? If so, how?

Maintaining the two-metre distancing rule can be tough as some of our work needs two or more people working side-by-side, so we are having to think of workarounds like working in relay on a job.

Why do you think it is important that you continue to work during COVID-19?

It is important to keep the nation connected through this difficult time as people rely on the internet more than they think. Not just from a business perspective - there’s lots going on in the background, for example, we’re still able to help people upgrade to superfast broadband if they need faster speeds.

What do you find most difficult about working during the lockdown?

Having to check with customers to see if the site is safe to work on and what protective equipment we’ll need. It’s hard to know what level of risk you’re exposing yourself to.

Can you tell us about your proudest moment while working during the lockdown?

Working on the Nightingale Health Hospital, in Cardiff. We had to work from scratch to put in broadband circuits that would serve thousands of volunteers, people working from home and help connect the patients to their loved ones. Despite all the difficulties, we got everything up and running in one day.

Has the response you receive from the public changed since the lockdown?

Generally people have been supportive once you explain to them that we have a role as key workers. I haven’t experienced it myself, but I have colleagues who’ve had abuse from people who think we’re breaking the Government’s restrictions.