Good to hear @Ofcom set out its approach to regulating to prevent #OnlineHarms - namely that it will be an evolutionary, evidence-based approach. We’d suggest a good starting point is knowing, independently, confidently and proportionality which users are adults and which are not https://twitter.com/pi_conference/status/1233006338940243968

More than 100 delegates participated in discussions on topics affecting the Internet Industry at the 7th annual ISPA Conference on Wednesday 9th November. The event was kindly hosted by law firm K&L Gates at their offices overlooking St. Pauls and was sponsored by ProLabs and Netsweeper.

The day included a keynote speech from the Minister of State for Crime and Security at the Home Office, James Brokenshire MP, and throughout the day attendees heard from expert speakers on topics including; blocking harmful content; coping with network demand during the 2012 Olympics; next generation broadband; and copyright infringement.

James Brokenshire MP, Minister of State for Crime and Security

The Minister began his key note speech by welcoming the fact that cybercrime and security were no longer niche topics but were in fact high priority issues for Government. He emphasised that the blurring of boundaries between technology and the real world provided a lot of advantages but also cautioned that greater dependency on technology could lead to greater vulnerability, new dangers and challenges.
The Minster differentiated between three types of computer crime:

3.            The use of technology to facilitate offline crime, e.g.  improved communication platforms for terrorists
The Minister then highlighted that the current capabilities of the Home Office and Law Enforcement Authorities (LEAs) were not sufficiently developed to deal with the new challenges or benefits that technology offered to combating crime. He argued that this would have a knock on impact on public safety. He went on to say that the Government’s response would involve the provision of new powers to LEAs to close the gap, e.g.; in relation to communications data and interception capabilities; the formation of a dedicated cybercrime group; the takedown of illegal websites; and the implementation of the Prevent strategy. However, he stressed that he had the intention to keep Government interference to a minimum. Instead he emphasised the importance of developing a closer partnership between the public and private sector and that the challenge to make the internet safer was a mutual goal.
Following on from the keynote speech, the Minster answered questions from the floor. The Minster accepted that more could be done to inform businesses and the public on whom they should turn to if they became a victim of cybercrime. He also accepted that better guidance for local police forces may be needed but stressed that Government was already tackling this issue and that the new National Crime Agency will function as a centre of expertise. After stressing the importance of cooperation in his speech he was also asked how industry and Government can actually work better together and he replied that he believed that the purpose of events like the ISPA Conference was to explore these options. 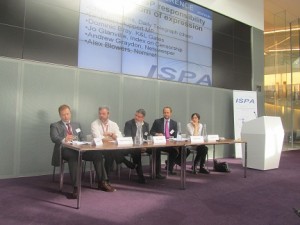 Jo Glanville highlighted the importance of differentiating between legal and illegal material and said that she was concerned about the pressure that is being put on ISPs to remove content. She particularly focused on the work that Index on Censorship were doing in relation to the reform of defamation law and expressed concerns about a recommendation by the Joint Committee on the Draft Defamation Bill that would devalue anonymous online comments.

Dominic Bray also spoke about the reform of the Defamation law and outlined the key issues for Internet Service Providers including the potential new rules for anonymity.

Andrew Graydon reminded the audience that issues such as security also needed to be taken into account and that it was necessary to adopt a more nuanced view rather than simply talking about the trade-off between ISP responsibility and online freedom of expression.

Alex Blowers informed the audience that Nominet was currently consulting on a new expedited domain suspension policy that would be available to a limited subset of law enforcement authorities.

During an interesting question and answers session these issues were explored in further detail and the panel seemed to agree that ISPs should not be asked to assess criminality of content and that they should only be required to take down content if there is a court order. 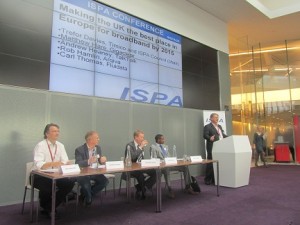 The morning’s second session focused on the Government’s ambition to make the UK the best place in Europe for broadband by 2015.  Speakers on the panel were Matthew Hare, Chief Executive - Gigaclear; Andrew Heaney, Director of Strategy - TalkTalk; Rob Hamlin, Enterprise Director - Arqiva; and Carl Thomas from Fluidata, all chaired by Trefor Davies, CTO of Timico.

The panellists each spoke for 5-10 minutes on whether they thought the UK would have the best broadband by 2015 and if the current approach was working.  Andrew Heaney felt that the demand for superfast broadband wasn’t out there and that the obsession with higher and higher speeds was unhelpful.  Matthew Hare shared Gigaclear’s experience of building a fibre network in Rutland, one of the most rural parts of the country, and pointed out that consumer demand was hard to predict, citing the example of smart phone proliferation.  Rob Hamlin compared it to the TV broadcasting minimum standard, saying that broadband should also be available to all – a Ford Focus broadband service rather than the Ferrari service that is sometimes advertised and unachievable for many; finally, Carl Thomas spoke of some of the benefits of superfast broadband to both society and businesses, offering up Sweden as an example. 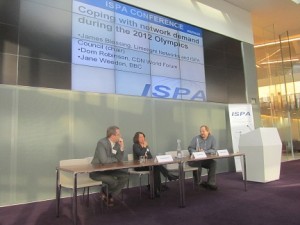 Coping with network demand during the 2012 Olympics

The afternoon kicked off with a panel session on coping with network demand during next year’s Olympics.  Speakers on the panel were Jane Weedon, Controller, Business Development at the BBC and Dom Robinson Chair of the CDN World Forum, and the proceedings were led by James Blessing from Limelight Networks and ISPA Council.

Jane’s presentation demonstrated the fact that volumes of traffic was only going one way and that next year’s events, including both the Olympics and the European Championships, would have far more content being streamed than ever before.  However, as people use more ways to access content nowadays this would be spread out across many platforms.  The closing remark of how can you plan for something unprecedented was very prescient.  Dom Robinson’s presentation looked at both legal and ‘illegal’ traffic and cautioned against the lack of UK-based content distribution networks and noted that users would be viewing the Games online at work, creating issues for B2B ISPs.

The presentations can be found at the links below. 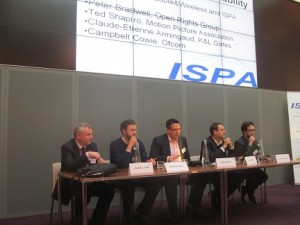 The DEA next steps and ISP liability panel session was chaired by Mark Gracey, ISPA Council Chair and Regulatory Manager at Cable&Wireless.

Mark introduced the panellists and gave some background to the topic describing the passing of the Digital Economy Act as, ‘rushed through Parliament’.

Campbell Cowie, Ofcom’s Director of Internet Policy, Consumer Group, said that he estimated that the first notifications would be sent out in spring 2013 and that the initial focus would be on main fixed line ISPs. He also said that the code would be published ASAP followed by a review by the EU.

Peter Bradwell, Campaigner for the Open Rights Group, said he was concerned about the pressure on ISPs to block voluntarily and self-regulate. He also said that due process, privacy and freedom of expression needed to be upheld and that there should be a review of how copyright works in a digital age.

Ted Shapiro, Senior Vice President - Motion Picture Association (EMEA), admitted that there were not enough legal alternatives but new services were launching every day. He said that consumer education and enforcement of rights needed ISP cooperation and that rights holder efforts were focussed on blocking sites that had the sole purpose of infringing copyright.

Claude-Etienne Armingaud, Partner at K&L Gates in Paris, described the French Hadopi law as a three strike process leading to a one month suspension of service and a fine. He also said that ISPs were not being compensated for costs of storing data, mailing infrastructure and processing requests.

Mark Gracey said that the costs may be passed on to consumers and Peter Bradwell said that as many as 40,000 people could be priced out through the cost of appeals.

Availability of content was touched on and Ted Shapiro said it was no excuse, but he understood, and that there were many more services now and new things were launching every day.

It was also re-iterated that site blocking was not a silver bullet and that the DEA would act as a scarecrow to put off the majority of people. 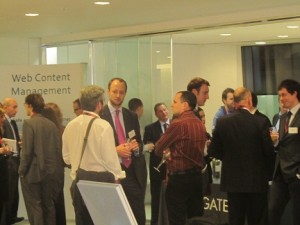 Delegates had the opportunity to network and talk to the sponsors over a glass of wine and canapés after the last session had concluded.

ISPA would like to thank the speakers for their interesting and informative contributions and K&L Gates for hosting the event at their excellent venue. Thanks also to all the attendees and a special thank you to the sponsors for making the event possible to run.

If you are interested in further information about the event or would like to get in touch with any of the sponsors please email admin@ispa.org.uk. 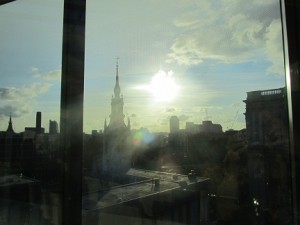 Over 200 companies in the UK benefit from membership of the UK’s leading Internet trade association.

A cookie is a snippet of text that is sent from a website's servers and stored on a web browser. The non-essential cookies used on this website are:

Sessions - We set a small PHP session cookie for our cookie notification functionality, this is deleted as soon as you close your browser.

Google Analytics - This allows us to look at really useful data about the visitors we have had to our website.
Cookie details:
To read more about Google's cookies visit https://developers.google.com/analytics/resources/concepts/gaConceptsCookiea


WordPress - If we have comments enabled or allow the public to contribute in other ways via default WordPress functionality we will also use some cookies. These are required for the website to function properly.
Cookie details:
To read more about WordPress' cookies visit http://codex.wordpress.org/WordPress_Cookies

You can find out how to change your settings or more about the cookies we use at the bottom of this page.